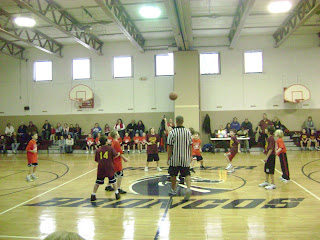 Opening tip off. Brendan's buddy Conner was the center and Brendan played guard. They play 2 minute shifts and then it's massive subbing. The game was very entertaining. Some of the kids could play and some could NOT. Some I wondered if they had ever watched a game. Lathers played Farmington, and lost 14-20. B's buddy Drake plays for Farmington and they had to guard each other. They were funny. Over all it was a good game to watch and I'm sure as the season goes on all the teams will get better. 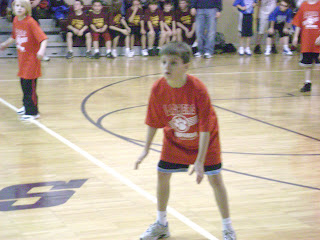 Here's my favorite player. Check out that defensive stance. Good job B.
Posted by Cindy at 6:45 PM