I created some fun little friends. Wait till you see the whole layout. The patterns are from Treasure Box Designs. I'll share some more images tomorrow.

A little birdie told me so share his friends with you too. 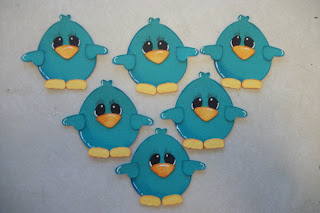 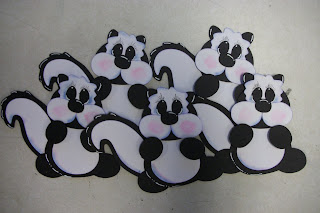 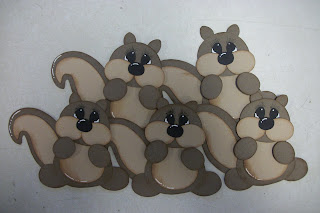 I'm just NUTS about these little STINKERS. See ya soon.
Posted by Cindy at 10:08 PM 1 comment:

In February I took my son and a friend to visit my adopted Daughter, Missy, in California. We had a trip to Disney planned and decided right before we went to take a trip to Hollywood. It was only a short drive and I wanted to see the Hollywood sign and the Walk of Fame. I pulled my sketch from the Sketchabilities blog and I was off. 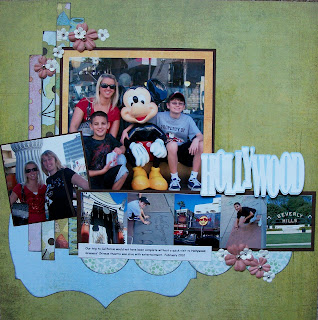 On this one page layout there is one main photo and 6 supporting photos. That's a lot of pictures on a one page spread. But it works and what makes it work is size. When you first look at it, your eye automatically goes to the BIG photo first and then travels left the the medium size shot and then right into the line of small photos. 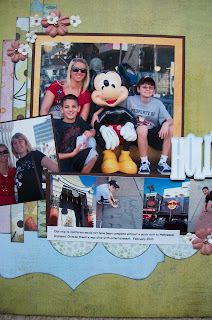 I kept my title in proportion with the smaller photos but pop dotted it for depth. Come on I couldn't do a layout and not pop dot something. The floral embellishments are subtle and in the background. The photos are the definite focal point of this layout. 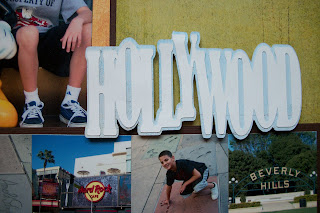 Go out and try a sketch today!
Posted by Cindy at 2:33 PM No comments:

Each month at the Scrapbook Zone I run a Cricut class that explores a different Cricut cartridge. This month we are playing with Sentimentals. What a fun cartridge. It has some great features including phrases and shadows.

As soon as I picked it up I knew I wanted to create a layout using the bee's and the hive. There is not only a layer option for these guys but a shadow as well. The background image is a postage stamp shape. I used my Design Studio program to make it a fit to page element. It started out as a rectangular shape but with a little stretching it became a square. The background paper is Cosmo Cricket, I think. 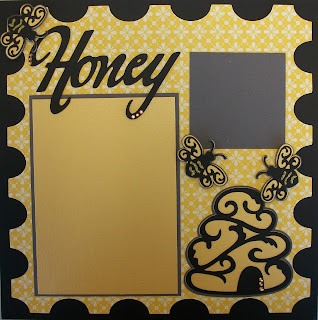 The title is on the phrase feature and has a shadow. I choose to use it as a single layer. I didn't like the shadow in gray like the other elements are and I didn't want to introduce another color. I added dimension with a few well placed pieces of Bling. 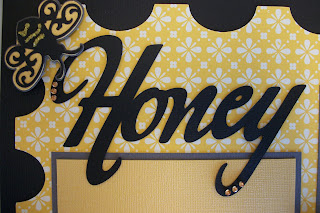 The bee's and the hive are tripled layered. There is a shadow, a base and a layer option used. All the shadows are in a gray, the base is yellow Bling and the layer is black. I love the detail in the layer feature. I added a bit more dimension with some yellow Stickles and repeated the three pieces of Bling in the hive door. 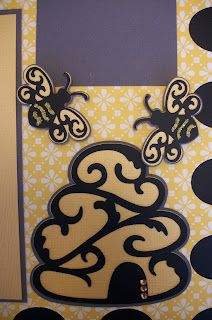 After creating the first layout I was still in love with the negative space from the stamp background. So I just had to use it. The whole layout started here with the background. 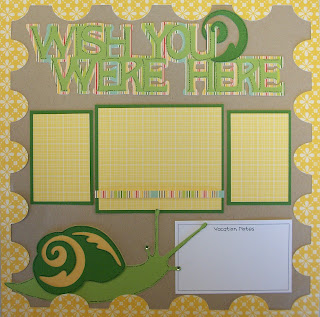 The title is a phrase with a shadow. The stripe paper is a coordinating one in the same line. I used some pen work to give the title a little definition. The swirly arrow is the negative space from cutting out the snail shell. Guess what we will be talking about in class? Using the negative spaces that are left over after cutting. The subtitle on the journaling block helps pull the layout together. 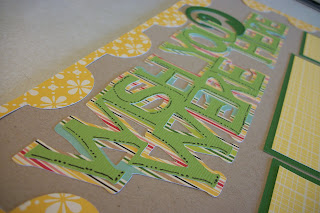 The snail was just too cute and I wanted to show people how to use him on a non gardening page. He has been given the same pen work for definition and 2 pieces of bling for his eyes. 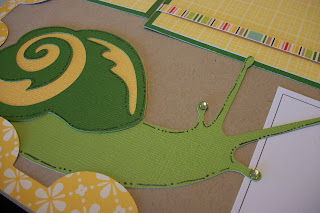 This cartridge has a ton of card elements on it. So I pulled a plain card with rounded corners and the matching envelope added a really cute Doodle Bug paper to it and a simple layered title. Done. Quick and easy card. 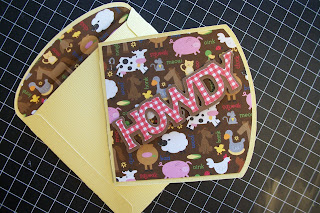 My child is a hockey player but I'm not the typical hockey mom. Because of my profession I'm usually roistered with his team as well, as the medical person. So what fun for me when Brendan's team played Derek's (my nephew). The boys have always wanted to play against each other. Now Brendan is a travel player and this season we were AA, Derek played AAA but a year younger. It's not uncommon for AAA teams to play against AA teams the year above them and that is what happened.

To capture this moment I chose this sketch from Sketchabilities. 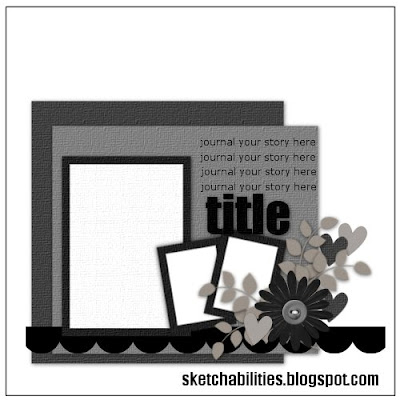 And turned it into this: 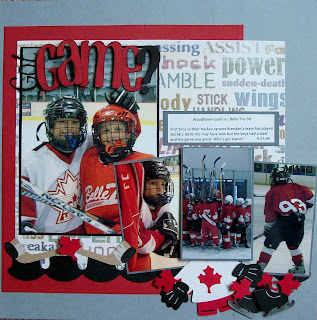 Not all the photos are from the game but I wanted to achieve a quick over all hockey layout and be done with it. 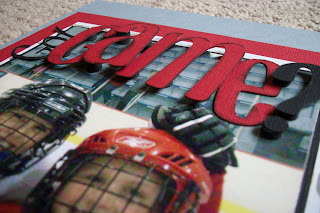 To really give my title depth I pop dotted some of the letters and over lapped them a bit. The "A" is actually double pop dotted. I used my new Don Juan cartridge for the font. I put my Cricut reward points to good use recently. 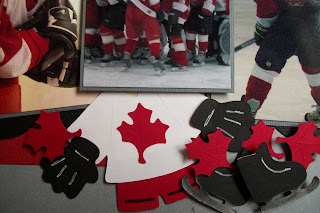 In the sketch you'll notice the flower cluster in the lower right corner, now I could not use flowers on a hockey layout so I did cluster of hockey junk. To kick off the season we had a meet and greet for the team at our house. I made a fun center piece for the table with a hockey player off the paper dolls cart, one for each kid. A had a few left after the party, so I cut one apart to make my gathering. Some of the pieces are pop dotted. (Yes I have a pop dot addiction.) 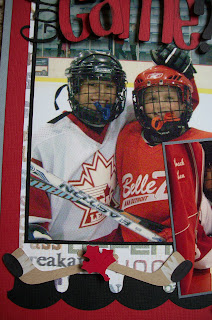 The sketch had a scalloped border, again a bit to girly for hockey so I used an EK tab punch and cut the piece in half to create a unique border. The hockey sticks and pucks are from the center piece and layered with a maple leaf. (Yes pop dotted!) 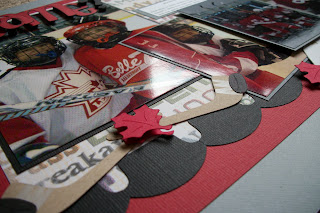 Well I hope I've encouraged you to try a sketch. This site has some wonderful ones. I want to challenge you to use an old punch in a different way. Maybe a bit of the unexpected. What are you waiting for, get going and create something fun.
Posted by Cindy at 2:44 PM 4 comments: