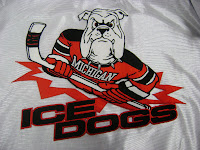 Well I survived. My weekend was so wacked out I'm not sure where to begin. My son had friday off school and I had to work. Sooo I hired my niece to babysit. Sam, she's the best. I had to be at the store at 9:45, made it on time. Worked till 2, it was unusually quiet for a "freaky friday". Then I jumped in the blazer for a trip to Burton (near Flint) for a Michigan Ice Dogs (MID) jr. hockey game. Should have stayed home. I think my kids did. We played so bad I'm embarrased to say "I'm with the team". I had lots of injuries on both sides and worked like crazy. Lost 9-2. OUCH! Then as if that wasn't bad enough, I needed gas before I drove an hour home. So I stopped at the Shell station. Got out my credit card and cash, so I could run in to Wendys and grab a bite to eat. Locked my keys in the car. Complete Dork! Well it cost me $55 and about 30 minutes. But I did get to eat.
Saturday we played much better and won. And Sunday, early game 10 am, oooohh real early. We played well as a team but goaltending was weak and we lost in a shoot out.
As I sit here tonight I'm dead tired and ready for bed. Just waiting for the kid to get home. I'm hoping for a semi productive day tomorrow but I'm doubting it. No MID hockey for 2 weeks, thank god.
Posted by Cindy at 7:45 PM