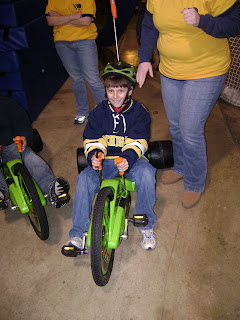 Last Saturday we went to watch our buddy Kyle play hockey, he plays for the Marquette Rangers in the North American Hockey League. They were playing the Motor City Machine at the Yack Arena in Wyandotte, about 30 minutes from our house. They had a drawing to race Big Wheels at the first intermission and Brendan and his buddy Mike were picked. It was too funny. The slightest tilt of the wheel sent them spinning out. They had to make 3 laps of the ice, easier said then done. Just ask Mike, he spent more time spinning out then moving forward. 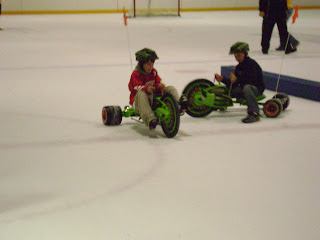 The boys certainly had a good time. Brendan won the race and their prize was a bag of candy. I'm sure the race was more important then the prize. 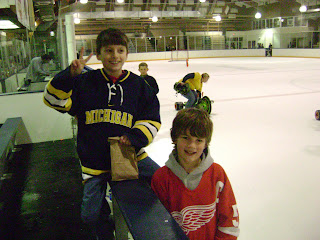 The Rangers won the game. Kyle got booted late in the 3rd period. I think he got 2 and a ten and the ref's knew the game was over so they just sent him to the locker room. See ya Kyle. 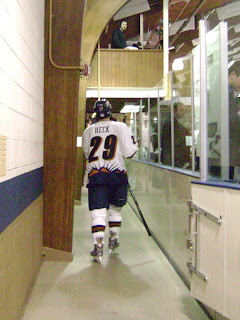 It was so nice to be able to catch a couple of his game this season. We miss him at our house, it's very quiet. Who knows where he'll end up next year. My league has picked up 2 new teams in Wisconsin, so maybe he'll get to come visit me close to his house next winter.

Have a good weekend. I'm off to work shortly. Nothing like a Friday night at the Zone with Katie.
Posted by Cindy at 11:31 AM