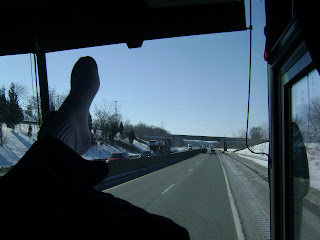 Well the game in Danville was a bust. They were having a Breast Cancer fundraiser and wore Pink jerseys and socks along with pink hockey tape. Way cool. Us...we didn't play so well. We spent way too much time in the box and just couldn't put the puck in the net. We had one player who spent 17 minutes in the box, got a game suspension and a $125 fine. What a night he had. NOT!!

Sunday morning we were up early and off to Fairview (aka St. Louis). It would be really really nice to not get lost. Well lost might be stretching it, we took the long way. For some reason Mapquest took us north to go south. We probably lost 45 minutes. We really could have used it. We arrived at the rink to discover the game was at 12:15, warmups at 11:45. It was 11:10. Opps! 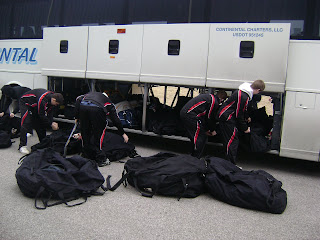 We played with enthusiasm and zip in our step for most of the game. Then for some reason late in the 3rd we stopped playing and just stood around watching the other team. Guess what happened?? They scored of course and scored again and again. Yep we lost our 3rd game. So aggravating. We should have taken 6 points this weekend and ended up with 0. Load em up and lets go home. 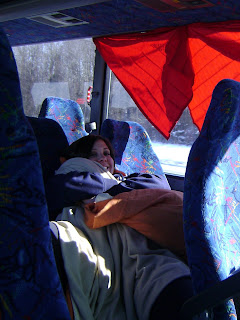 A quick stop for food and gas and we were off. It's a long ride home but I checked with streets and trips so we had the RIGHT directions and we made good time. Not sure why we spent 40 minutes looking for a McDonald's but we did. James like to take the scenic route and time didn't seem to matter. Oh well. We made it home about 1:30 am. not too bad. I was in bed by 2:10.

Thought I'd share a couple more pics from the trip here: 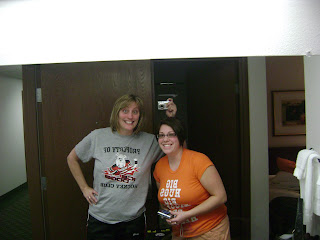 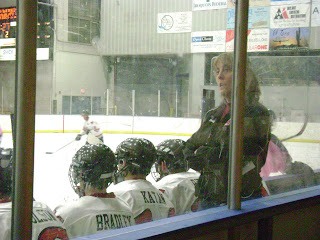 Notice the look on my face. I'm thinking "What the hell are they doing?? That is not what we said to do! Shit!! Now who am I going to send out to play defense?"

It was a crazy weekend and now we have to win the next few to maybe get a home game in the first round of playoffs. We'll see.

I'm home today with a sick kid. So I updated and did a card. I'll post it next week as it's for the Card Challenge DT.
Posted by Cindy at 7:47 PM